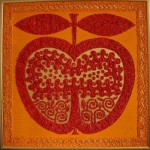 The Rose family has always been prominent, both celebrated and infamous – the eye of a storm of rumors and beliefs in cultures world-wide. They are associated with Love, Sweetness and with the color Red. Of this prestigious lineage, sweet, humble Apple is known world-wide for her reliable tastiness, abundance, and sensual symbolism.

The Apple tree is sometimes cited as the tree from which the devil tempted Eve to eat of the ‘Fruit of the Knowledge of Good and Evil’, and since that time, Apple has earned herself a duplicitous reputation in more ways than one.

An Apple was put upon the table of feasting Greek Gods with the note: ‘for the most beautiful woman in the world‘. Naturally, this mischievous message started an argument between the Goddesses present. The ‘Apple of Discord‘ incident eventually culminated in the Trojan War. 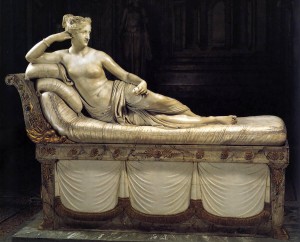 Venus, the Roman Goddess of Love, is often seen carrying the Apple of Discord. Roman husbands, mourning the passing of their beloved ladies, often commissioned elaborate tombstones of their deceased soul-mate holding this very same apple – to show the world that to them, she was the most beautiful.

Apples in Japanese Pop culture are used as a symbol of Love, in the much the same way hearts are used in North America. 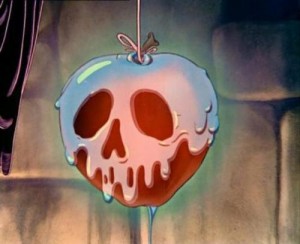 At the center of an apple are seeds containing the deadly poison cyanide; a toxic dose of cyanide, inhaled, can stop a heart. This same poison is the weapon of choice for several perfidious but lovely members of the Rose family. Some believe it bears a symbolic warning about the nature of Love.

Apple has certainly maintained the family image in many ways, with her throngs of followers and paramours; as well as her on-going and much publicized romance with Spicy Cinnamon. Together they have popularized an entire genre of scented candles, massage oils and romantic recipes.

Tune in next month, near Valentines day, when we will discover the lives and loves of Apple’s most romantically daring cousin and namesake of the family, the enthralling Sex Symbol: Rose.